Short and sweet because, hey, we are busy around here during summer time! For us summer started with a wonderful cob oven workshop. It’s great to have the oven and to have the cob bench that’s attached to it. All of us on the land here appreciate everyones’ hard work during the workshop, and the oven has seen much use since then! The main garden area was reclaimed and fencing put up to protect from the deer and the chickens, that garden space saw a nice early start and has been offering lettuce, kale, beans, tomatoes, strawberries and more. Then into the hot spell but no dry spell for us, the well is a great blessing on this land, we are all thankful for the well meter that was invested in, it has been nice to track the well and see the recharging process. Speaking of water! Next we moved into a greywater workshop. The laundry-to-landscape diverts water from our washer and feeds a mulch basin that then feeds one fig tree for now with two more waiting to go in the ground. Another big thank you to the workshop workers! Shortly after which the side garden bed was finished and fenced in, and a late crop of tomatoes, melons and cucumbers were planted. We will see tomatoes and cucumbers for sure and are hopeful the melons will mature to finish. Throughout the summer we have been enjoying the fruits the land has to offer, cherries, wild raspberries, blackberries, apples, pear, golden plums…yumm! The community kitchen area has been seeing much use, cooking, canning, and juicing to name a few. And don’t forget the outdoor showers! Who can beat an outdoor shower draped in hops vines with solar hot water!? We were also in and out of the smoke for a little while here, the winds blew in smoke and ash from a nearby fire. The fire is mostly out now and we have been having clear days for almost a week now. The flavors of summer and soon fall will be upon us, until then….

A green community in the making located in California’s beautiful Mendocino county town of Laytonville offers a real estate opportunity. Find out more… 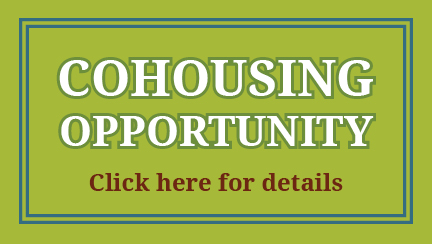 Katie McCamant of CoHousing Solutions has been involved with cohousing development for 30 years. Having developed and designed dozens of communities, as well as having lived in her own communities for most of the last 25 years, Katie brings a wealth of experience to our Project. She co-authored the book that introduced cohousing to the US, Cohousing: A Contemporary Approach to Housing Ourselves, as well as its update, Creating Cohousing: Building Sustainable Communities. Learn more on CoHousing Solutions’ website.